Single origin coffees are becoming increasingly popular with drinkers who are branching out from the generic java produced by mass-produced blends. Costa Rica’s fertile soils produce some of the world’s best coffee – but what are the best beans on the market? Are they worth the money and what is the best way to drink them?

We have been busy sampling bags of joe from the Central American nation and have drawn up a list of our favourites below.

We have also produced a small guide to the general characteristics of Costa Rican coffee, which has much to do with the nation’s unique geography, history, and production methods. Click here to jump to our bluffer’s guide, or read on to discover our top single origins from Costa Rica. 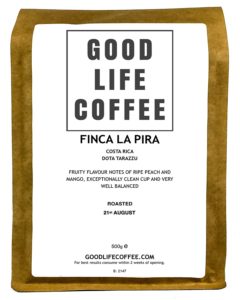 This coffee from artisan roasters Good Life really impressed. The beans were roasted a couple of days before they landed on our desk and it had that unmistakeable freshly-toasted taste.

The beans all come from the 50-year-old estate of Carlos Urena Ceciliano, which is located high in the mountains of the Tarrazu region and certified as organic. The beans are wet processed (as described below) giving the coffee a clean and well-balanced flavour. The acidity is mild, the cup clean. The packet claims notes of peach and mango which did come through when we drank it as a pour over.

Some single origins don’t really hold up when drunk as espresso as they tend not to have the right balance of acidity, body and depth. However, the Finca La Pira fared very well as espresso too – giving a lovely clean rounded flavour and strong crema.

Another single origin from the Tarrazu region of the country. These were billed as medium roast online, but are actually dark roast. It matters not – they are delicious and a good choice for anyone keen on sourcing their joe as ethically as possible.

The beans are certified fair trade and rainforest alliance and are grown in the shade to protect the workers who harvest them and the integrity of the soil they grow from.  The beans are wet processed and give a balanced medium body cup with medium acidity.   Really nice toasty notes with a hint of apple – we found it was very aromatic too – the smell fills the room. Lovely. 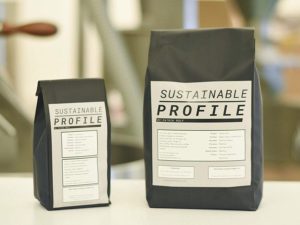 These Caturra & Catuai beans are grown in the Alajuela region of the country, very high up at altitudes of 1500-1600 metres above sea level. They are then washed, dried and shipped to Denmark for roasting.

The growing conditions and medium roast from the Danes, have given a rich and sweet character with notes of cocoa, caramel and red fruits. It’s billed as espresso – but we felt it arguably made a better cup when we ground it coarser and made filter. Definitely not a one trick pony.

These beans all come from a single farm, so it is about as pure a single origin as you can get. An interview with the grower features on this podcast if you want to listen while sampling. 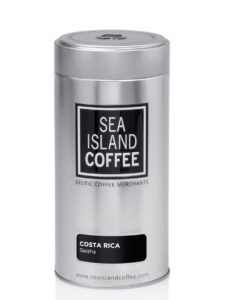 Costa Rica is home to one of the world’s most prized coffee types – Geisha. It is an arabica cultivar that hit the headlines in 2012 when it became the world’s most expensive coffee. As with all super-rare and exclusive coffee, it is important to buy carefully to avoid being ripped off.

Thankfully, Sea Island are merchants dedicated to tracking down the world’s most extraordinary coffees and are a highly trusted name on the speciality landscape. Their Costa Rica Geisha is actually one of the cheaper varieties they sell – but it still comes in at around three times the price of regular beans.

The beans come from the innovative Coffea Diversa plantation in the mountains on the Costa Rican border with Panama.   The flavour is soft and delicate with notes of lavander, molasses, and cocoa.   Not really an all-rounder this one. Drink it black and ponder its charming and subtle complexities. It’s amazing as a pour-over, but the true qualities of this coffee are lost when its drunk as espresso or latte. 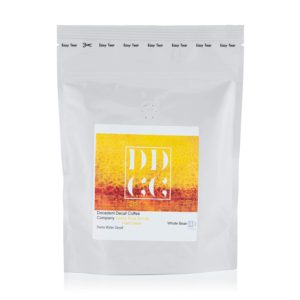 Decaf drinkers rejoice! Single origins are no longer the preserve of caffeinated quaffers. This award-winning coffee uses beans grown in Tarrazu at altitudes more than 1,200 metres above sea level.

They have been decaffeinated without chemicals using the all-natural Swiss Water Process. For more on that see this article

The decaf process has not made a dent in the flavour the beans pack. It’s crisp, balanced and more on the chocolatey/nutty side of the flavour spectrum than the fruity.   It’s a good all-rounder and can even be drunk before bed – winner. 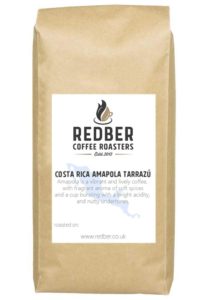 These beans are roasted to order so arrive super fresh from the oven. This lot are a blend of Caturra and Catuai grown 1350 metres up, in mountains just south of the country’s Central Valley.   The raw beans are washed and drum dried before being exported.

In spite of being washed this had a notable but not unpleasant acidity that means each cup has a nice tang to it. The coffee also has floral notes and nutty flavours with a creamy body.   It’s vibrant and fun and fares really well in the cafetière, Aeropress, drip and filter machines.

Being a small country Costa Rican coffee accounts for just 1% of the global total produced each year, however the country has the highest production rate in the world – growing 1.6kg of beans for each hectare of land.

The nation’s crop is highly prized and since 1989 the government has banned farmers from growing anything but top-quality arabica varieties.   Coffee was introduced to Costa Rica in the 1700s by Spanish settlers and the nation boasts the oldest coffee trade in Central America.

There are eight different coffee growing regions which are located at high altitudes of between 1,200 and 1,800 metres above sea level. The regions feature volcanic soils and benefit from sunny mornings and wet afternoons – in other words, perfect coffee growing conditions.  Most of the coffee comes from the regions of Tarrazu, Monte Crisol, Alajuela and Cartago but there is also production in Guanacaste, Heredia and West Valley.

The vast majority of the coffee exported by Costa Rica is grown by an 80,000 strong crop of small-scale farmers who cultivate plots of less than 12 acres.

While there are a number of varieties at play, coffee connoisseurs have identified a broad set of characteristics that many coffees from the region share.

When trying to gauge what to expect from a particular single origin – you should consider how the beans are processed.   Some coffee is dried in the fruit before it is washed and roasted (these are known as natural coffees) while other coffees have the fruit blasted from them with high-pressure water jets before the beans are dried (these are known as washed coffees).

In Costa Rica, producers are keen on a sort of halfway house method known as the ‘honey process’ – which has nothing to do with honey, confusingly.   Rather it is where the coffee beans are partially washed before drying. This process clears the coffee bean of its pulp, but leaves an inner casing of mucilage and parchment over the bean as it dries. As these beans dry, minimal fermentation takes place as the mucilage dries out. This gives the final product a brighter acidity than washed coffees, but less sharpness than natural coffees.