By: Patrick Browne
In: Coffee Beans
Tagged: beans
With: 0 Comments

Coffee buffs will go to great lengths to track down the perfect cup of coffee – and there are a few varieties of beans that are widely considered to be the tastiest on the planet.

Exclusive and high-end coffees tend to come at a price and our guide below contains some of the world’s most expensive beans as well as a few that are a bit more reasonable.

But how do you know if it is worth splashing out on a coffee? Are you getting the real McCoy are being conned out of your cash? We thought we would treat ourselves to a few of the more expensive and rare coffees on the market in order to give you a rundown of the best products to splash out on if you are feeling flush. 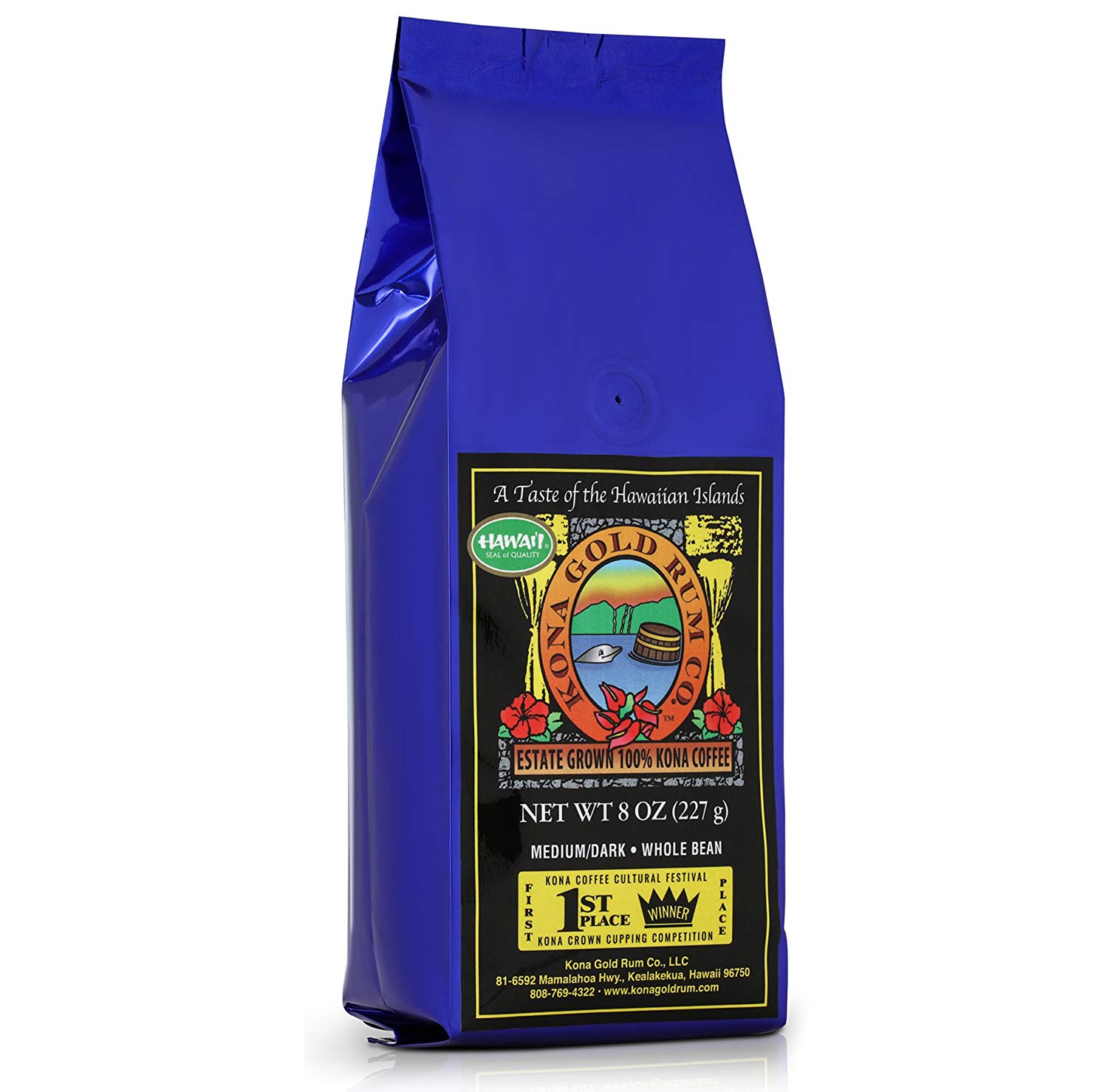 Kona is the name given to beans that are grown on the volcanic slopes of Hualalai and Manua Loa on Hawaii’s Big Island. This location has the perfect microclimate for growing coffee. The beans grow in temperatures of between 12 and 20 degrees Celsius and are well protected from the sun by the island’s clouds. It grows around 3,000 feet up on volcanic soils that have perfect drainage.

These factors conspire to produce a coffee of mild taste and acidity, with a fruity flavour and syrupy body. The beans sell for $30 and $50 dollars per lb. The main factor driving the high cost of beans from Hawaii is that the wages for the workers are far higher than in other producing nations such as Brazil, Costa Rica and Ethiopia.

There are also only around 800 coffee farms in total in Hawaii – so the industry cannot benefit from the same economies of scale other countries have.

These award-winning beans are wet processed, hand picked and air roasted medium dark. The beans are the highest grade beans the Hawaiian Agricultural Society awards – this grade is (honestly) known as ‘Extra Fancy’.

Unlike several other brands on the market – this product is 100% Kona and not an overpriced blend of 10% Kona and 90% inferior beans, which are peddled by other companies.

We really enjoyed the taste and aroma of these and felt they were fairly priced, too. 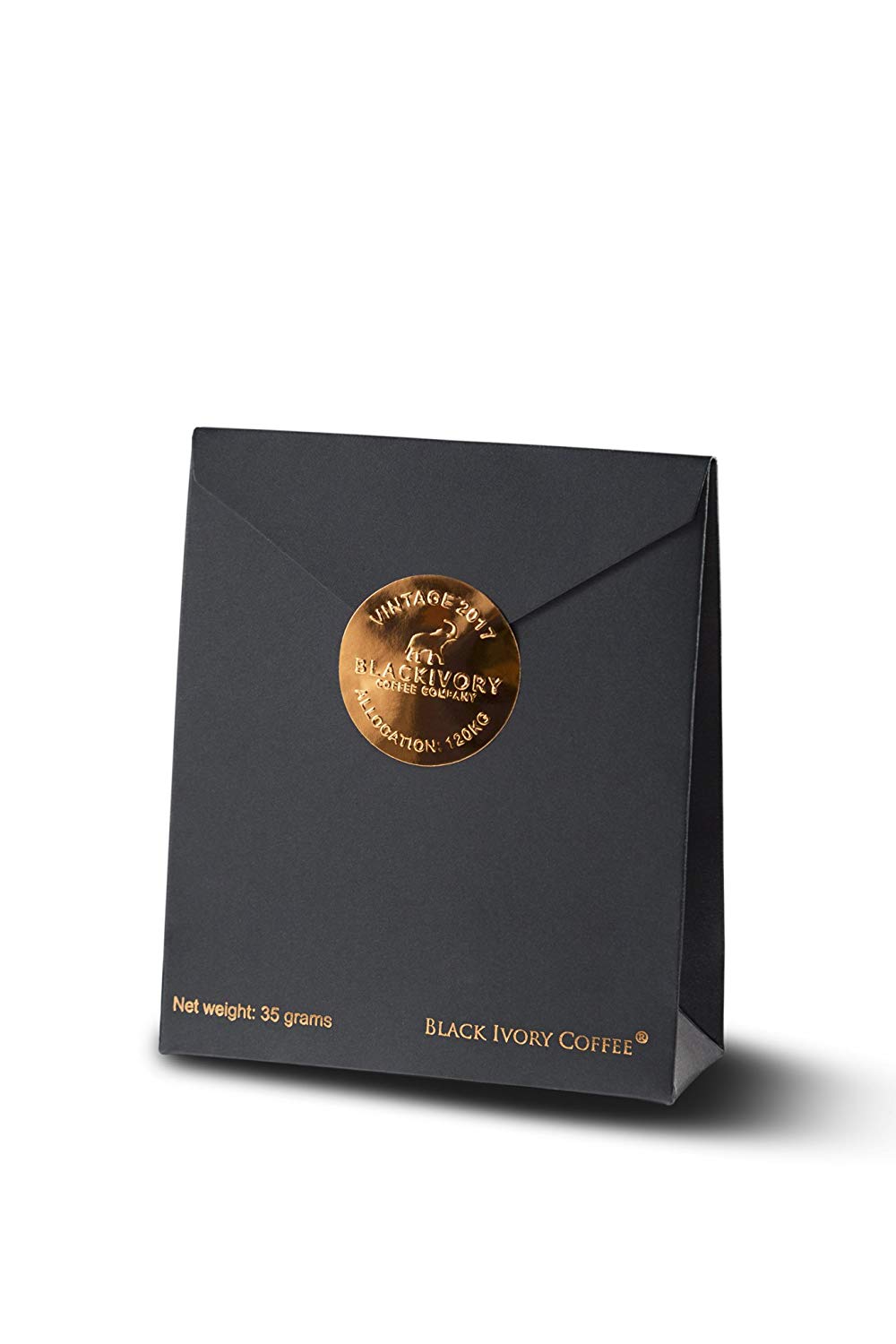 Black Ivory Coffee is the latest trend in coffees that have been eaten and excreted by other animals, be they civet, bat, bird or in the case of Black Ivory…Elephant.

The coffee bills itself as the world’s rarest and most exclusive – this is because just 150kg of the stuff is produced each year and largely sold to top-end hotels around the world.

The coffee comes from Thailand where a local company mixes Thai Arabica cherries with the feed of a local elephant sanctuary. The Elephant’s carers have the unenviable task of collecting the digested cherries 72 hours later.

The beans are processed and roasted by local workers earning 50 times more money than other workers in the nation’s coffee sector and the production of the beans supports the Golden Triangle Asian Elephant Foundation.

What does it taste like though? Well, as with other poo-coffees the digestive enzymes inside the animal’s stomach alter the flavour of the coffee, which has notes of chocolate, spice, cacao, leather, grass and low bitterness.

It is eye-wateringly expensive, but is a unique and enjoyable experience. The beans come in a vacuum sealed bag and were very fresh. 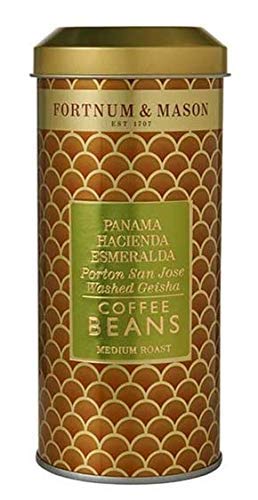 Panamanian Geisha tops the charts of ‘world’s most expensive coffee’ most years. The story of Geisha coffee begins at the Hacienda Esmerelda in 2004 when growers noticed some of the beans at the farm were slightly different in shape to the rest of the beans, which they then harvested and roasted separately.

These ‘Geisha Beans’ it turns out where a different variety that originally hailed from Ethiopia, but had taken on a whole new flavour profile while nestling in the soils of Central America. The coffee is especially prized for its unique orangey-flavour.

These beans are medium bodied with crisp acidity and are proper tasty. Fortnum and Mason are a trusted name associated with quality teas and coffees and the true nature of these beans comes across in their intense aromas and wonderfully citrusy tang. 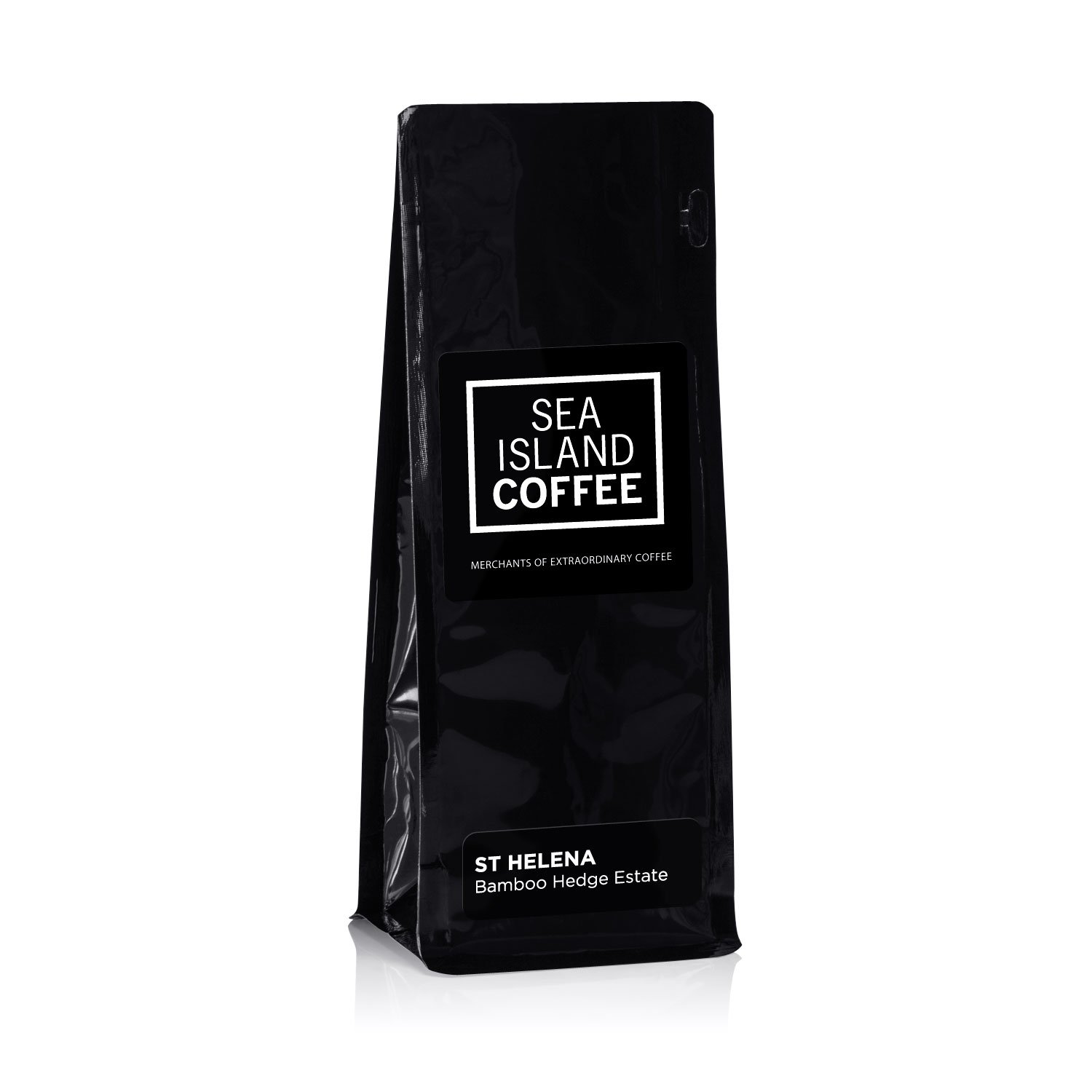 This coffee is so good even Napoleon Bonaparte was a fan! The diminutive Frenchman spent six years in exile on the island of St Helena – which is located in the middle of the Atlantic.

The island’s remoteness – it lies 4,000 km east of Brasil and 2,000 km west of Angola – is part of the reason this coffee is so expensive, as transportation costs are quite high. But what makes it so special and is it worth the price?

The island’s microclimate means it can be grown lower than in most other countries. Coffee was introduced to St Helena he 1730’s by the Dutch East India company and thrived there ever since. Technically this coffee variety is the Green Tipped Bourbon.

Sea Island are a trusted name dealing only in rear and speciality coffees from around the word. Their St Helena is grown at the Bamboo Hedge Estate, which lies high in island’s Sandy Bay valley at an altitude of just 400 metres.

The coffee is low on bitterness and has a clean and lively taste with hints of citrus and peach. 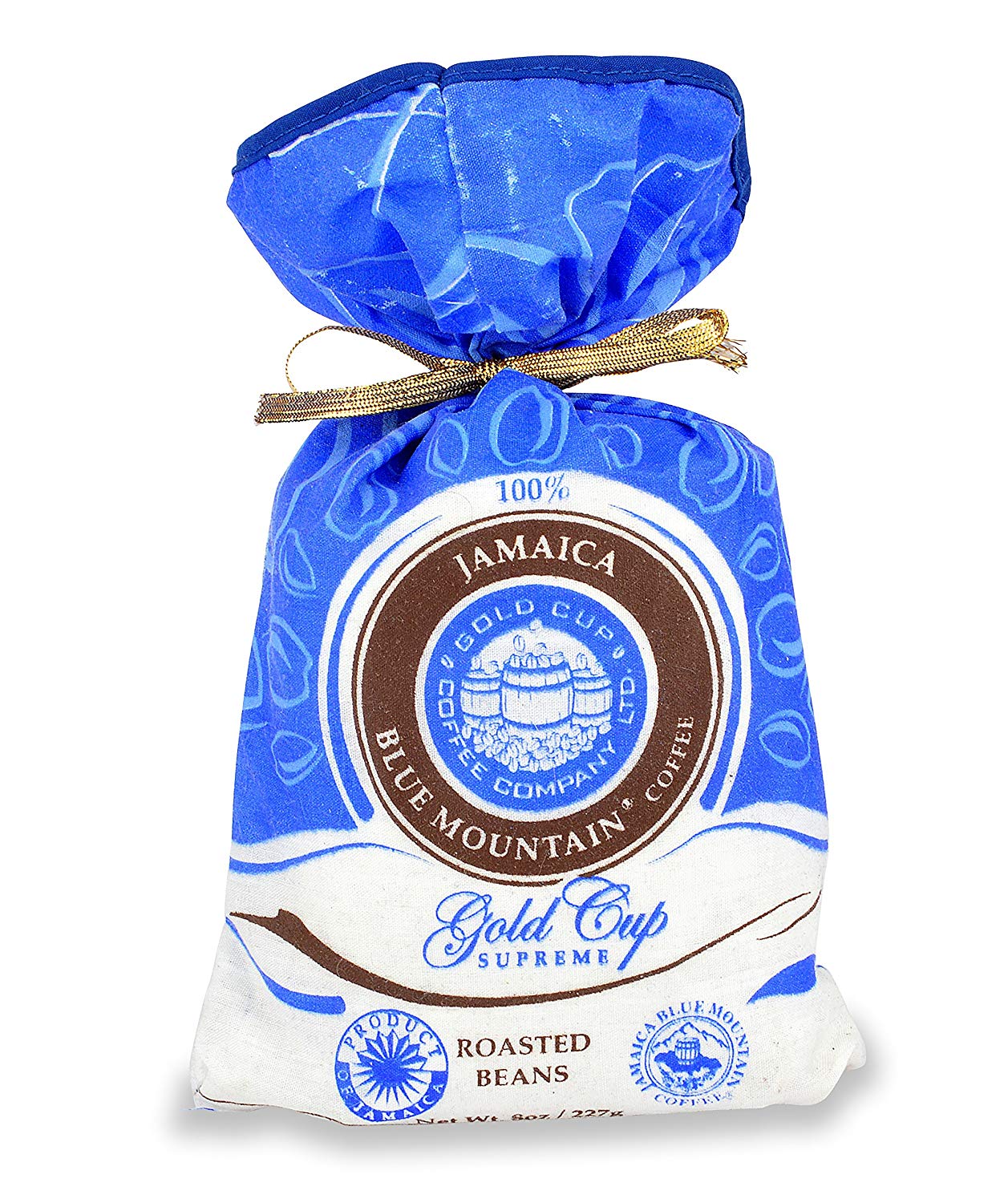 All Jamaica Blue mountain coffee comes is produced in a small area of mountain farmland north of Kingston, where the beans grow at heights between 3,000 and 5,000 feet. Cool conditions and volcanic soil here mean it takes about 10 months for each crop to come to fruition – about twice as long as it takes to produce standard crops.

The beans produce a coffee that is full-bodied, with a mild and sweet flavour that is complex and kind of creamy. The Jamaican government is fully aware of just how good this coffee is and closely controls its production.

All beans are sorted by hand and certified by the country’s Industry Coffee Board, which gives clear rules on how the beans can be processed and roasted. Each crop must be blind tasted by experts called “cuppers” before it is certified as the Real Mccoy and allowed to leave the island.

These beans are 100% Jamaica Blue Mountain, that have been highly graded – it also includes some peaberry beans. They arrived very fresh and the medium roast has gives a low acidity and a sweet flavour to every cup.