How to Make the Perfect Cappuccino

By: Patrick Browne
In: Coffee Questions, How To Guides
With: 0 Comments

The cappuccino – a shot of espresso topped with a warm frothy milk – is without doubt one of the most iconic drinks of all time. Velvety, rich and satisfying it is a quintessentially Italian cup. Each one carries connotations of sunlit piazzas, style and sophistication.

The cappuccino has fallen out of favour in recent years, with bean heads and coffee chains increasingly favouring the less frothy, milkier, ‘flat white’. But properly made, the Cappuccino remains a timeless classic.

While it may be an Italian icon, legend has it the Cappuccino originates in the coffee houses of 17th century Vienna, where it was invented by a Capuchin monk – from where it gets its name. Pope Innocent XI in 1683 dispatched his Capucin envoy Marco d’Aviano to Vienna to convince European military forces to defend the city against invasion from the Ottoman Turks.

After the Europeans had lifted the siege of the city, Marco celebrated with a cup of java in the Austrian capital. Once in the coffee house, he was allegedly shocked by the strength of the brew served up and so asked the waiter to add some warm milk to the drink to make it more palatable.

It’s a nice story to tell at the cafe’ – but probably an urban myth. The hard facts suggest the cappuccino was invented in Italy in the 1930’s shortly after the modern espresso machine and milk steamer came into usage.

There are very strict rules for making a cappuccino, laid out by associations of master baristas in Italy. In the bel paese the drink is served in one size, and one size only. If you are in a coffee shop and you see “small”, “medium” and “large” versions on the menu – a cappuccino it most likely ain’t.

One of the reasons a cappuccino at an Italian bar almost always tastes wonderful is in part due to its smaller size. This allows it to be drunk much quicker, giving the coffee within less time to oxidize and take on a more bitter flavour.

Get in a froth 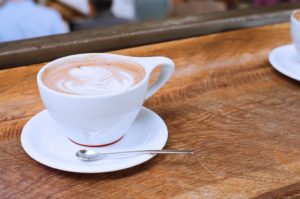 The milk here is frothed in a separate jug. Pour in the milk, but don’t stick the nozzle of the steamer attachment in just yet. First, you will want to turn the steamer on for a couple of seconds pointing the end over your espresso machine’s drip tray. This will release any vapour that has condensed inside the tube, that would otherwise water down your milk.

Stick the nozzle into the milk jug and turn it on full blast, but keep the end of the nozzle toward the top of the milk so that the steam can circulate.

You can lower the nozzle so it sits a bit deeper in the liquid as the volume of the milk starts to expand. Heat the froth to 65 degrees Celsius or slightly higher, given that you will let the milk rest a moment while you pour the espresso into the cup. Frothed in this way, you are left with a jug of compact, shiny and pourable foam with very small air bubbles in. Pour this mixture directly on top of your espresso shot starting from the centre of the cup to complete the cappuccino. You can add cocoa powder to the top if that’s your bag – just make sure you use 100 percent dark chocolate powder only. No flavoured milkshake powder, cinnamon or any other spice mix is allowed.

It is also worth noting that in Italy the cappuccino is considered a breakfast drink. They are almost always consumed before lunch and only a tourist would bother with one after a meal. Any after lunch or dinner coffee is usually drunk espresso or macchiato. This is because Italians see the cappuccino as a fairly filling, substantial drink which won’t sit well on a full stomach.

Obviously, we all have our own tastes and cultural preferences when it comes to coffee, but thinking about how and when we drink different types of brew is a nice way to maximise the pleasure from every cup.

It is worth bearing in mind that a coffee-mad nation of 60 million people has almost unanimously decided a cappuccino and a plate of croissants or biscuits is the only way to start the day. Buon appetito!