By: Harry Lawrence
In: Coffee Machines & Gadgets
With: 0 Comments

The market is awash with pour kits, but which is the best coffee dripper to buy? In this article, we will compare and contrast two of the most popular offerings out there, the Hariro V60 series and the Kalita Wave series.

Needless to say, drip filter coffee is something of a comeback kid. Less than a decade ago when you drank a cup of drip-filter, you drank a mug of lukewarm coffee that you served from the limescale encrusted pot on the rusting hotplate in the back of the office. Not so anymore. Drip filter’s revival is complete and the method is en-vouge again with coffee fans, who have refined the age-old method to a point where it is now arguably one of the best ways of extracting well-rounded cups of black coffee from freshly ground single origin beans.

The Hariro V60 series and the Kalita Wave series are two very similar sets. Both come from Japan – where pour over drip-filter is far and away the most popular brew method. They both feature conical filter baskets with a mug-like handle. The basket on each unit is lined with ridges or grooves to help the flow of water.

To the untrained eye they are the same thing and retail for very similar prices. However, there are some notable differences. We are not going to get drawn into which one is ‘best’ as frankly, that is going to depend on your own personal preferences, but if you are looking to purchase a drip filter machine you should be aware of these differences to help you make the right choice.

The Hario V60 comes in two sizes. The smaller size – 01 – is best for producing single cups of coffee. The coffee basket will hold around 24 grams of ground coffee, which is enough to yield 350/400 ml cup. The larger size – 02 – will make up to 800ml and can also be used to make single cup servings. So if you want the flexibility, plump for the larger size.

The Kalita Wave is also available in two sizes, the smaller #155 and the larger #185 version. The smaller model will hold up to 24 grams of ground coffee and the larger will take up to 32 grams, which is enough to make three or four cups.

Both units use different filter papers. The Hario V60 opts for a cone-shaped paper while the Kalita wave uses the cupcake style brew papers. You kind find bleached and unbleached papers for both machines as per your preference. Prices for the papers vary wildly depending on where you get them from and what deals are on offer. Generally, papers for the Hariro are cheaper and easier to find than for the Kalita so bear this in mind when choosing which one to buy.

Hariro also offers two different grades of paper if you want to play around with using thicker or thinner filters.

The V60 has a ‘V’ shaped cone that has a 60-degree angle. The interior of the sides have internal ridges – and there is a large opening at the base of the cone which water flows through into the cup below. The ridges are a set of spiral ribs which help water flow through your coffee and release air during brewing (these can be seen in the image below) – all of which is all aimed at allowing you to extract just the right amount of flavour from your beans. 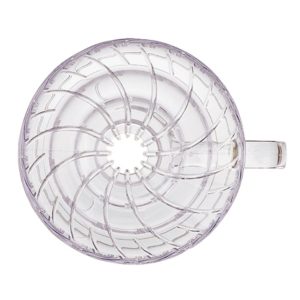 The Kalita wave has a slightly shallower angle to its cone and gets its name from the ‘wavy’ ridges on the inside of cone’s surface. These are also designed to let air escape during the brewing process. Unlike the Hariro, the Kalita’s the cone terminates in a flat base three holes in that release water into the cup below.

The different designs mean that the interaction between coffee and water for each dripper is different, and gives slightly different results in the final product. We will talk about what this means for your cup in the section ‘performance’ below.

The Hariro drippers are commonly made from glass. Indeed – a bit of trivia here – Hariro is Japanese for ‘king of glass’. They are increasingly made in ceramic too and there have been a number of different editions on the market made with a wide range of materials. There are funky versions with wooden cup rests, copper and even plastic editions. The plastic Hariro is a good bet for anyone who travels a lot and wants to brew on the go.

The Kalita Waves’ most common iteration is in stainless steel, although you can find versions in ceramic if you shop around. They also make a very sexy looking copper version – but it is sold at a huge mark-up. If you are a bit clumsy, Kalita’s steel might be the way forward as it is drop-proof. 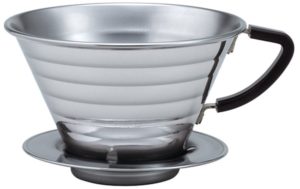 Ultimately, the material makes little difference to the outcome of the cup, but bear in mind that each material will heat up differently, so factor it in when preheating the basket before brewing. 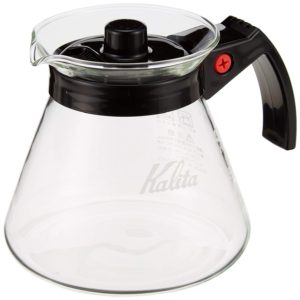 It feels like there have been endless words dedicated to coffee fans pitting both machines against each other in showdown battles in a bid to determine which of the two is better.

To us at The Coffee Bazaar that feels like a fairly asinine and unhelpful way to compare the two machines. When brewing drip-filter coffee there are so many variables, including but not limited to: humidity, water temperature, and hardness, coffee grind type, pouring technique, brew-time…this tends to render attempts at direct comparison useless. Everyone has their own preference for what they want from a cup of coffee, which changes according to the time of day and season.

So what to say about the two methods? Well, first off, both produce very good coffee but there is a key difference between the two: Kalita’s design with its flat bottom base and wavy sides means water moves through the coffee very evenly and stays in contact with the grounds slightly longer than it does in the V60. This makes it easier to use – you don’t need to have a fancy pour over technique, you can be quite heavy handed and you still get a nice cuppa. We played around with it for a while, pouring water into it every which way and found it was hard to get it wrong. The coffee it produces tends always towards rich and full bodied.

The V60 is much better at extracting fruity and floral flavours from coffee – so is a great bet for anyone who is into micro-lot, single origin type coffee where you might want to bring to the fore interesting and unusual characteristics of the coffee. However, to get the most out of the V60 does require a fair amount of trial and error, a good pouring technique and perhaps even a goose-neck kettle and a timer… not to mention a patient desire to experiment.

At the coffee Bazaar we enjoyed playing around with the V60 more because it was easier to change the taste and aroma of the final cup in a meaningful way. However, if you are in the market for a quick and easy tool to make delicious drip-coffee – the Kalita Wave is probably the machine for you.